If you have been following along with our Podcast then you know that I (LL) love my birthday, and well, birthdays in general. So, as Brad’s was fast approaching and during the busiest summer we have had yet (yes, even busier than last summer when we planned a wedding in 4 months and had 3 engagement parties, plus Brad’s bday.)

I wanted to surprise him on a date night. As you also know, Brad loves Korean BBQ! The past 2 years we have celebrated his birthday at OO-Kook in K-town. This year I wanted to surprise him and the two of us go to a new Korean BBQ. So, I looked up the top Korean BBQ restaurants in LA and then picked one close to us. My theory was to help find another incredibly awesome Korean BBQ close by so we didn’t have to drive to K-town whenever we wanted all-you-can-eat.

I found this awesome list. The top 15 LA Korean BBQ’s. Oo Kook was #12 and #5 was a new restaurant and in Culver City, just a couple miles away and right near Brad’s work. I texted Brad, “Have you had Korean BBQ in Culver City?” His response was, “No.” 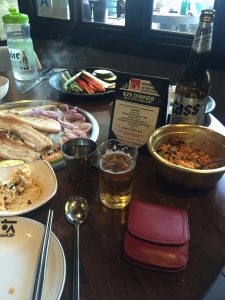 Fantastic! I get to surprise him with a top rated restaurant and if he likes it, he can go during lunch or we can meet up afterwork. I was stoked! PS, it’s extremely hard for me to keep a secret, so for the next week not telling him where we were going was killing me!

The night of his birthday we met up at the house, changed out of our work clothes and hopped in the jeep to go to his surprise bday dinner. As we pulled up to look for parking, Brad sees the place, Hanjip. If I haven’t set this up enough for you to guess, then here’s your spoiler alert: Brad has been there before! Yep, totally went there for lunch with his friend Kyle Peters and loved it. Soooo, wanh, wanh… the wind in my awesome-wife-planning-sails was sucked out. 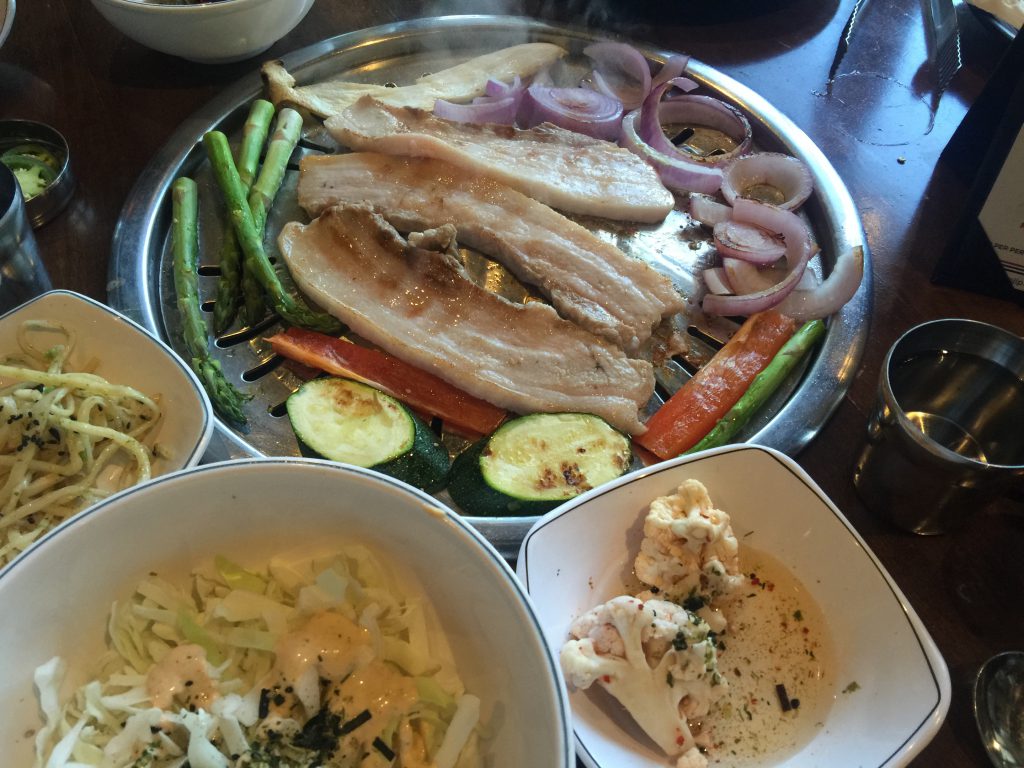 However, since he did love it, we still enjoyed a great date! 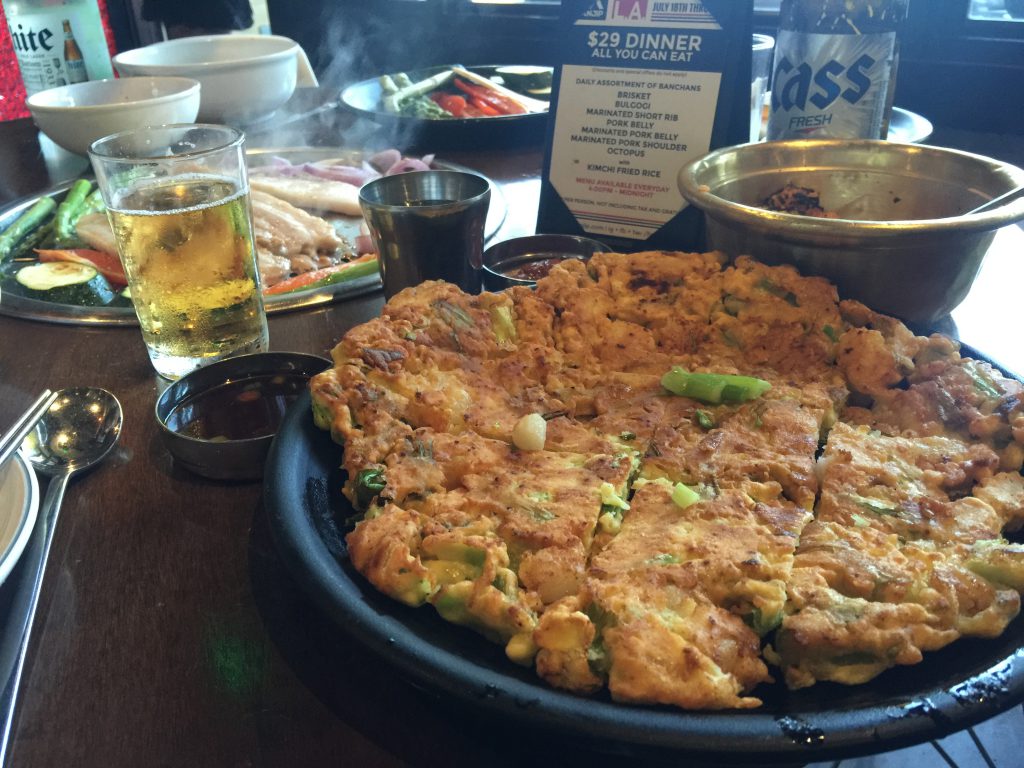 Then it was time for Brad’s birthday extravaganza! Here’s Brad to tell you all about his tour through little Tokyo Osaka (Japantown on Sawtelle.) 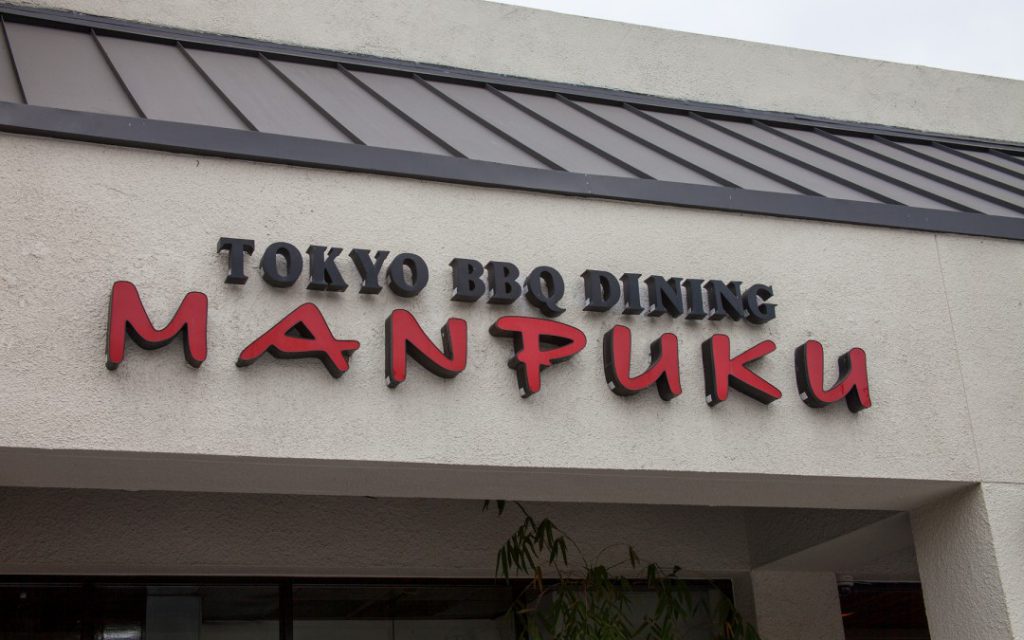 First stop for my birthday extravaganza was dinner two nights later at Manpuku, a Japanese BBQ place quite close to our place in Westwood. Wonder no more – BBQ is clearly my favorite 😀 This, however, is Japanese, not Korean BBQ. It’s different in the way the meat is marinated, and the dishes that accompany the meat. Also, instead of soju and beer, it’s generally sake and beer. It was a bit more complicated at this place, because they don’t offer all-you-can-eat, but it was great to be back at this restaurant after so many years. Our party was made up of 10, and we feasted!

After Manpuku, a bunch of us skipped down to Liquid Kitty on Pico Blvd to hang for their infamous martinis and a great vibe. Some great laughs and even more fun times with friends.

The last three standing, DJ (the Boxing Chef), his old roommate and fellow Philadelphian, Jeremy, and myself ventured over to Pho Shop on Westwood Blvd. Pretty sure we were there until about 3am 🙂 Great food, and then back home it was 😀