Warning: "continue" targeting switch is equivalent to "break". Did you mean to use "continue 2"? in /nfs/c04/h06/mnt/85310/domains/asthecrowsfly.com/html/wp-content/plugins/jetpack/_inc/lib/class.media-summary.php on line 87
 Jungle Bugs and Temples of Angkor | As the Crows Fly
Skip to content
March 16, 2016 / brad / Blog

Jungle Bugs and Temples of Angkor 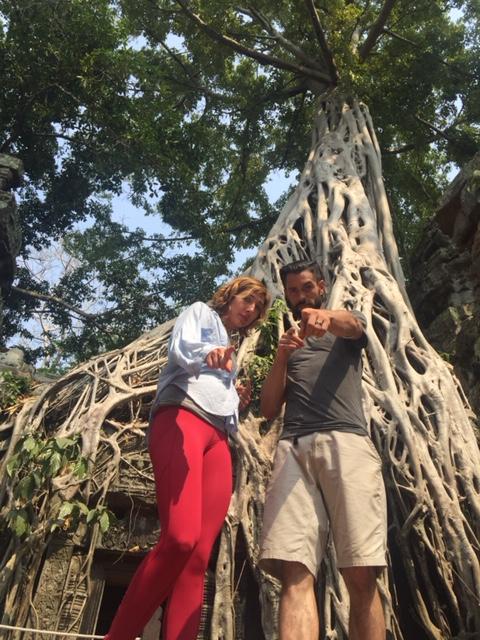 Brad here. First, let me say that I have been dreaming of visiting Angkor Wat since I was 12 years old, and picked up my first National Geographic. I knew them that I would visit these temples one day. For me, this trip is the completion of a 21 year goal, and I couldn’t be more happy to be sharing the experience with my lovely wife.

Thank you for entertaining my sappiness… Now onto the jungle bugs and wondrous temples you actually came here to read about! 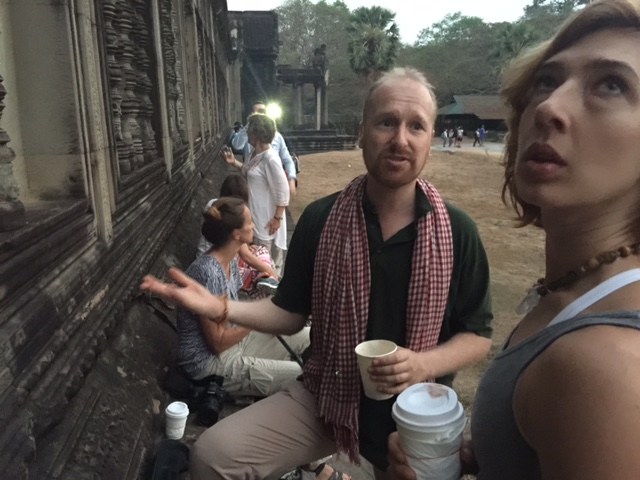 If you are planning to visit Siem Reap, Cambodia to see the temples and remains of the Khmer empire yourself, there is only one choice in tour guides: the entomologist, historian and all around Indiana-Jones-like jungle explorer, Mr. Stèphane De Greef. He and his girlfriend Ana Bell Betts (both pictured above) kindly took care of LL and I during our 10 hour trek, which started at 5am.

After a quick stop at the gas station for a coffee and bottles of water, we zipped off to purchase our day passes, and then off to see he sunrise at Angkor Wat. Below is a pano taken shortly after sunrise of Angkor Wat. You can see LL in her blazing red pants (of course!) 😉

I didn’t know this, but Angkor Wat is only one single temple. There are hundreds of them spread through the jungle in this country. It is a Hindu temple, while many others are Buddhist. 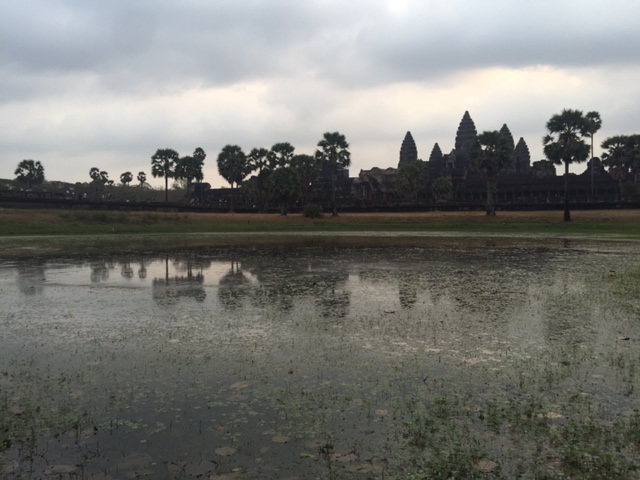 Above: the reflection pool with Angkor Wat in the distance.

There was apparently one very influential king who declared the national religion was to be Buddhism sometime at the end of the 12th century, and suddenly statues of Buddha appeared everywhere. When he died, they reverted to Hinduism, and almost all of the statues of Buddha were either removed, beheaded or defaced. It seems there is only one remaining depiction of this King, himself, other than a temple that was specifically built to dedicate his reign to demons and to hell. They almost eliminated him from history altogether.) 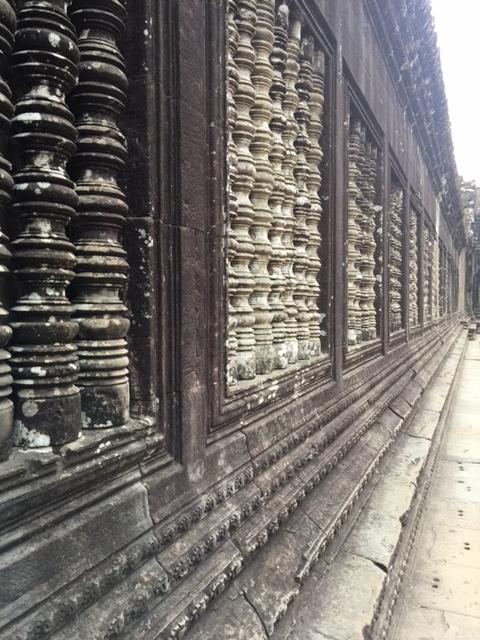 Above: one of the many walkway walls carved from stone at Angkor Wat.

Stèphane works as an advisor to the government of Cambodia, specifically to the director of the preservation of the temples, helping them create regulations and preserve the history of this magical place. He has been in this country for more than a decade, and was continuously telling us the history of the country, the people and then interrupting himself as a spider or bug would crawl or fly by, to show us the beauty of the nature here as well. 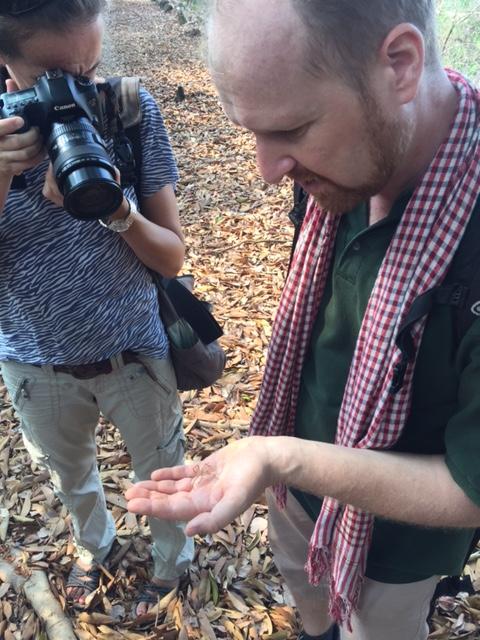 With that in mind, he took us off the very well beaten path, as more than 3,000,000 visitors visit these temples each year, mostly visiting only four temples. We left Angkor Wat and headed over to the west gate of Angkor Thom, to walk along the 8 meter high wall surrounded by a massive moat. Below is a picture of the gate. 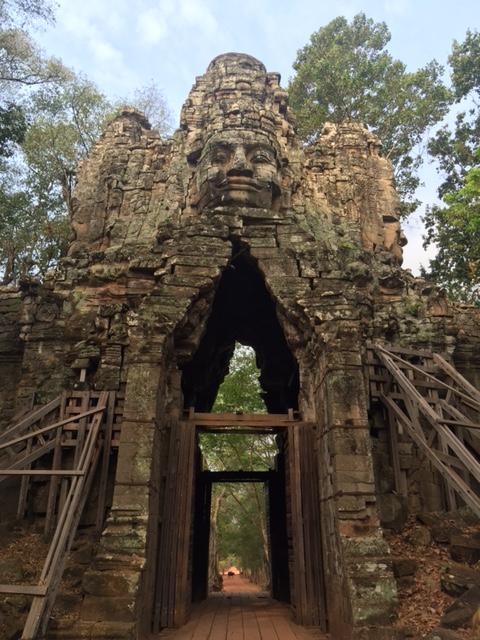 As we were walking north along the wall to the corner temple, Stèphane was getting into the politics of the country and how it has been molded by the history of wars and genocide. Until, we were interrupted by a gang of naked children climbing a 25 foot tree to reach the top of the wall, that is… (Don’t worry, this pic is SFW.)

The children wanted money or candy. This launched Stèphane down the problem of child abuse that is a very real threat to these local children, most of whom have never even seen a porcelain toilet, and wouldn’t know what do to with it if they did. He also works closely with the government and organizations who protect children exactly like these. It took him speaking quite a bit of Khmer to convince them that we were going to give them neither of what they asked.

After exiting the north gate, we walked along the moat, continuing east, and encountered a beautiful river scene of red dragon flies, until we came upon a herd of cows grazing at the water’s edge. LL found them adorable. They were quite tame and friendly, and surprisingly, didn’t smell at all. 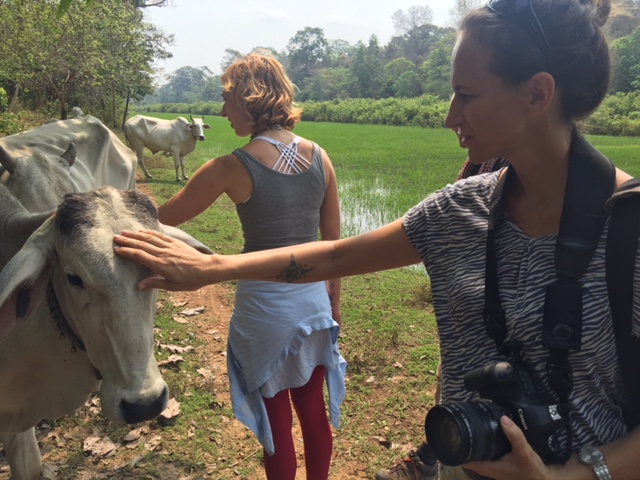 Below is a piece of 12th century pottery, which literally liters the ground along the wall and moat’s edge. During the construction of the wall, any broken pottery trash was included in the foundation. Clearly there is also a scorpion on this piece, but it’s actually only the shed exoskeleton of one. The scorpions aren’t deadly here, but their venom is more like a. Very nasty bee sting that will linger with you for a few days — not that I know from experience! 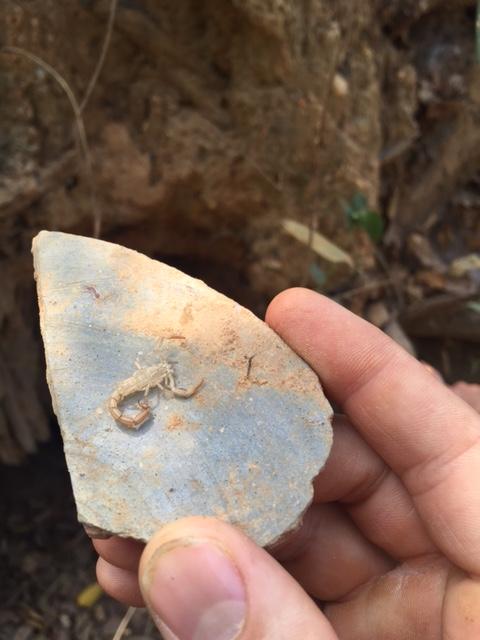 Here are a few more awesome bug shots, for your viewing pleasure:

Finally, we headed south to a few more temples, and into the center of Angkor Thom to the temple of Bayon, the Center of the Universe. It is amazing to conceptualize that it was built perfectly north to south and east to west. The hallways of all the temples are this way. At the top of each peak, there was always a hole to collect the rain water and drip it onto a statue. It would then be considered holy water.

I honestly can’t tell one temple from another at this point, but here are a handful of pics from the mix. Many are panoramas, so click to open them.

The above pics are only a small handful of shots that I took. LL and I will be receiving a slew more from Anna in another few days, so I’ll post some of those at that time.

Below is one of the last remaining images of Buddha. It is possible that it wasn’t defaced because of superstition… I mean, would you want to be the guy who destroyed the last Buddha? Haha 🙂 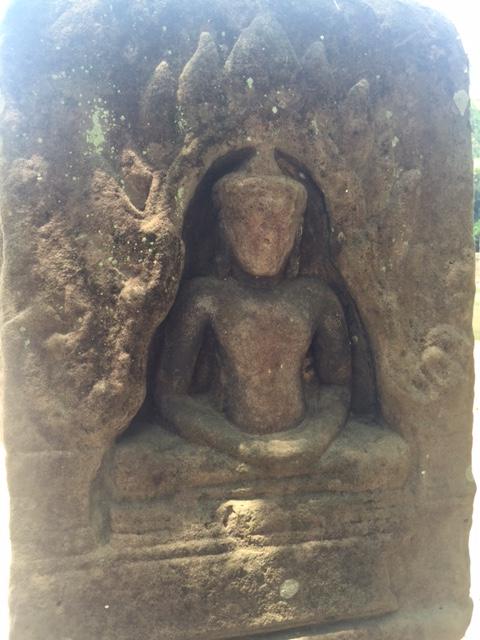 After 11 hours of trekking through 100 degree heat, we called it quits and snagged a local beer as we sat along a beautiful body of water, enjoying the shade, breeze, scenery and company. Below is a pic of some grilled frogs. Had I not been so full from lunch, I wanted to try one! 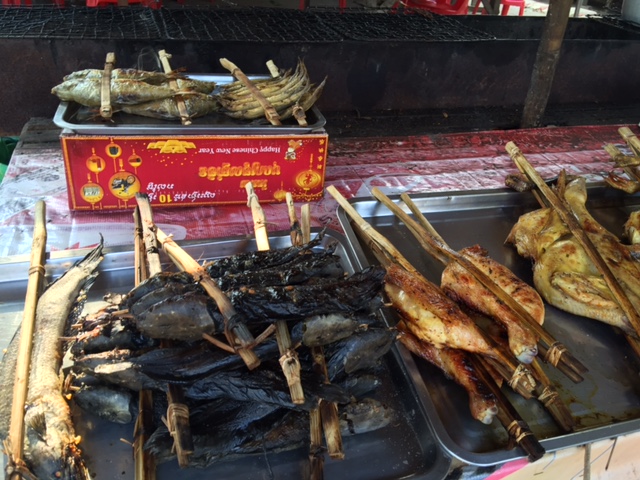 Siem Reap is a town that seems to have no rules. People drive on any side of the street, the side walks are not used for walking and the town meagerly survives from the money that tourists bring, as ticket sales for the temples go to the central government. It is a place of beauty and poverty, but the people we met were kind and happy to speak to us. I do not doubt that we will return here.